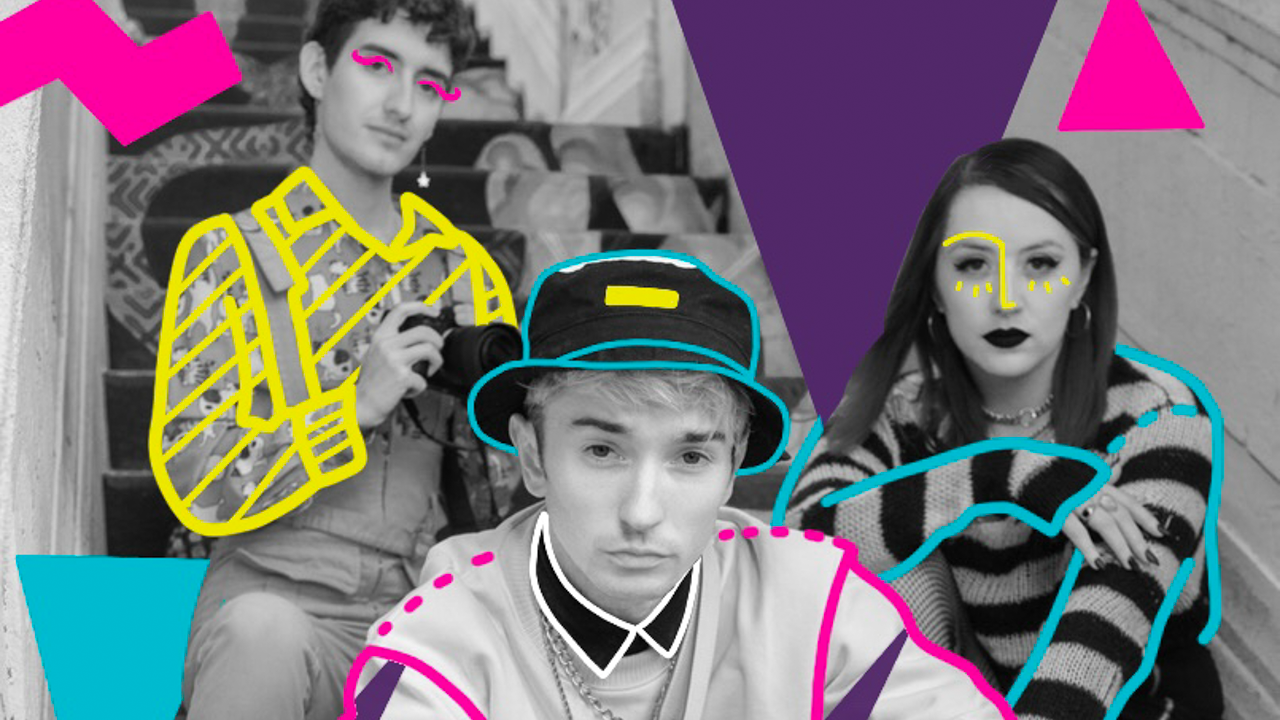 All About The Colliding Worlds of Fashion and Gaming

The lines between the fashion industry and the world of gaming are becoming increasingly blurred.

magine that you’re racing through a large festival ground, trying to figure out where you are on the map so you can snag one of only a few, limited-edition sneakers your favorite brand is dropping right now. As you run, you pass food trucks boasting some of the best local eats. But something is different about this experience — despite running at full speed, you’re not out of breath and you don’t catch a whiff of the enticing aromas you associate with your favorite street food as you run by those food trucks.

Why? You’re in a video game — one named ComplexLand to be exact. But this isn’t just any video game. It’s an interactive world that mimics in every sense the annual ComplexCon held in California every year.

The festival is known as a place where pop culture, fashion, music, and food meet for a weekend. However, this year the organizers had to pivot due to the coronavirus pandemic and created a virtual, interactive festival for attendees to experience from the comfort and safety of their home.

As demonstrated with ComplexLand, the lines between the fashion industry and the world of gaming are becoming increasingly blurred, and the convergence of the two seemingly polar opposite industries is something we’ve been keeping an eye on.

Continue reading this trend post about some of our favorite gaming and fashion collaborations.

In early December, Balenciaga revealed their next clothing collection not on the runway, but in a video game. It released its Summer 2021 collection in Afterworld: The Age of Tomorrow.

The objective of Afterworld: The Age of Tomorrow sounds like any video game. There’s a hero that “advances through distinct zones, motivated by takes and interactions.” But in reality, the game was merely an interactive tool to preview luxury fashion brand Balenciaga’s upcoming clothing collection.

The result was a stunning experience where users could see, in great detail Balenciaga’s new collection. As for the clothing itself, it reflected not only society’s overarching attitude toward fashion, but how the year 2020 has influenced it (for example, a handbag with Uber Eats’ logo).

This activation was successful because it invited fashion lovers into a completely immersive experience without abandoning the safety and comfort of their homes. Not only was it widely effective in getting the upcoming collection in front of consumers worldwide, but it also appealed to younger generations who are increasingly looking to video games as a source of entertainment.

We’re keeping our eyes on activations like this as the popularity of gaming continues to increase among Gen Z and fashion brands continue to evolve the ways they launch new collections in this digital and interactive world.

The Influence of Travis Scott

Travis Scott has been as influential to the marketing world in 2020 as Dr. Anthony Fauci has been to the world of infectious diseases (OK, that’s an exaggeration. But Travis’ marketability can’t be ignored). He’s acted as a harbinger of trends for some of the world’s biggest brands and will only continue to flex his influence.

This year saw a collaboration between Scott and Playstation that created a buzz among the sneakerhead community. In November, he revealed a pair of exclusive Nike Dunk Low Travis Scott x Playstation shoes for Playstation users. Those who wanted a chance to snag a pair had to go to Scott’s website and register in a raffle where only five winners would be selected.

Now, there are rumors that Travis Scott not only co-branded Playstation 5 sneakers but also collabed on his own video game floating around the gaming and tech spheres.

Speaking of cool kicks and their connection to games: let’s talk about Nike’s partnership with NBA2K20.

The collab is a play to target Nike’s video game-playing audience. Nike, which has been known for its close ties to basketball since sponsoring NBA legend Michael Jordan in 1984, is looking to a new generation of basketball fans to invest in the brand.

The partnership was pushed on Nike’s app, SNKRS, and invited players of the popular video game to unlock access to 10 exclusive sneakers through special challenges in the app by linking accounts.

By integrating Nike into NBA2K20, the video game was able to target an audience that was already deeply invested in basketball-inspired shoes. Marketers should look to this collaboration as an example of how to find overlapping audiences and specifically target them in an interactive campaign (plus, who doesn’t like a little competition?).

Louis Vuitton gave a whole new meaning to the word Zoom with the launch of its Spring/Summer 2021 men’s collection. Created by Vigil Abloh, CEO of the Off-White brand and Louis Vuitton’s menswear artistic director, the collection coincides with the virtual experience entitled The Adventures of Zoooom With Friends.

Using AR technology, visitors to the outdoor exhibit will get to interact with the Abloh-created characters by scanning QR codes to access Snapchat filters and virtual animations. Real-life inflatable versions of the characters are also scattered throughout the exhibit, making it easy to share the experience on social media.

The idea was first explored at the 2020 Digital Fashion Week in Paris and was then brought to the touring exhibition in North America (currently located in Miami’s Design District, but scheduled to tour Atlanta, LA, and Las Vegas).

This AR experience gives Louis Vuitton fans a way to (temporarily) escape 2020 by tapping into the popularity of virtual characters, while also encouraging visitors to buy pieces from the new collection.

To TikTok and Beyond

While gaming platforms are an emerging place we’re seeing fashion, we would be remiss to leave out how fashion has seamlessly transitioned onto other digital platforms.

TikTok has also made it easier for fashion designers and brands to promote their products on the app. Earlier this year, it partnered with Shopify in a move that made it easier for Shopify merchants “to create, run, and optimize their TikTok marketing campaigns” and reach younger audiences.

But TikTok isn’t the only Gen Z-geared platform to partner with fashion brands.

Looking for a new way to cut through a social media world filled with marketing campaigns and sponsored ads, fashion brands have collaborated with Snapchat to roll out branded clothing articles users can dress their Bitmoji avatars in. The popular social media app has worked with brands like Ralph Lauren, Levi’s, Gucci, and Jordan with great success.

Many of these partnerships followed on the heels of Snapchat’s decision to give users the chance to mix-and-match their Bitmojis clothing articles. This allows for more specialized branded opportunities with Jordans just promoting shoes or Ralph Lauren promoting polos, for example.

Not only do these partnerships increase a brand’s visibility among Gen Zers (75% of all U.S. teens use Snapchat), but these activations can lead to real sales.

Other fashion brands are taking advantage of the popularity of online virtual shopping and AI technology to generate leads and drive traffic.

Instagram has also worked to maintain its role as the premier online shopping and social media platform. Its most recent update was the introduction of Shopping in Reels, which allows for businesses and creators to tag products in their Reels videos. Instagram users can then tap a shopping bag icon on the bottom of the screen which will allow them to buy, save, or learn more about the featured product.

This update provides a new avenue for influencer marketing partnerships that will reach a wider range of audiences.

As virtual presences become an even more popular way to reach young audiences, finding a way your brand can collaborate with social platforms that are creative will be important.

This seismic shift from exclusive and big in-person launches and fashion shows to digital platforms (largely due to the coronavirus pandemic) is a democratization of the fashion world.

For many years, the fashion industry was only accessible to the select few and thrived off its exclusivity — you had to be in the right place at the right time with the right amount of money. In recent years, some of these barriers were removed with the creation of live streaming on platforms like YouTube and Facebook. However, audiences had to actively seek those clips out instead of them showing up on an algorithm tuned to their personal preferences.

Not only are these large brands inviting younger generations to take part in the experience and develop loyalty to their brand, but they’re appealing to those who may not have the time or resources to get to the location where these products were being dropped.

As accessibility, alongside transparency, becomes increasingly important for young consumers, brands need to make sure they adapt their marketing strategies accordingly. The time is now, dress up your gaming experience and you will see massive results.

Concepts Discussed
Gaming
Fashion
Esports
Thank you! Your submission has been received!
Oops! Something went wrong while submitting the form.