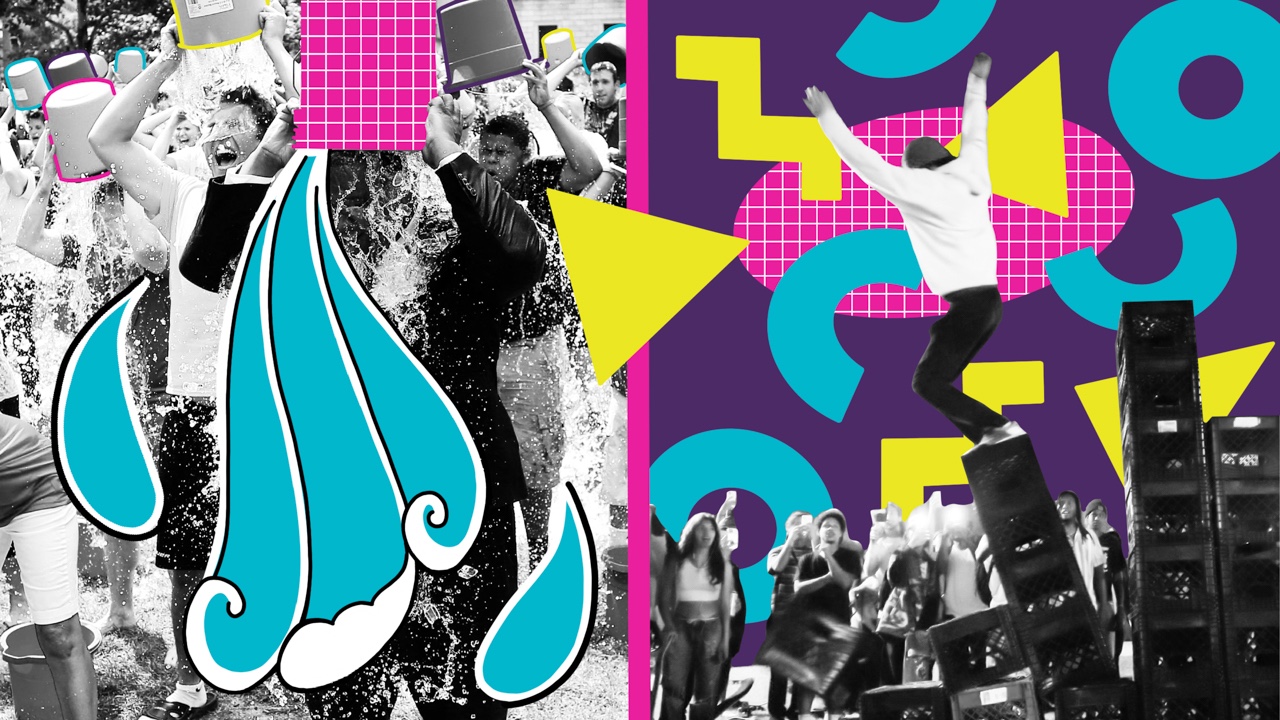 From Ice Buckets to Milk Crates, A Brief History of Social Media Challenges

The Internet is known for devouring viral challenges like a spoonful of cinnamon.

ocial media has always been a place for the ridiculous and the challenging, and this new craze is no exception. The most recent challenge to take the internet by storm is the Milk Crate challenge. Hundreds of people are taking to this seemingly simple challenge to walk up and over a pyramid of stacked milk crates. The challenge seems exceedingly simple but is surprisingly difficult, and has lead to many injuries.

This milk crate challenge is the funniest challenge since the ice bucket challenge years ago 🤣 pic.twitter.com/x0KfgBjTnz

Back in 2014, long before TikTok existed and most of us spent our time on Facebook, the ALS Ice Bucket Challenge took the internet by storm. Everyone from their friends at school to Chris Pratt, Oprah, and even Bill Gates, dumped freezing cold ice water on their heads and nominated others to do so as well.

While this challenge was entertaining, it was also a massive philanthropic success, raising annual funding to the ALS Association by 187%. While this may be the first philanthropic viral social media challenge that comes to mind, there are countless others. Take the #NoMakeupSelfie challenge, also from 2014, for example. Women were encouraged to post a photo on social media without makeup, with a text line for donations to Cancer Research UK in the caption. While many participated in the challenge while being unaware of its purpose, the challenge raised nearly $3M for cancer research.

Not all viral challenges have a philanthropic tie in, some are just fun to participate in, and hard to determine the origins of. Back in 2011, for instance, my Facebook feed was filled with photos of people lying down like a wooden plank, a simple challenge aptly called "planking." And when the planking challenge started losing steam, another seemingly ridiculous challenge popped up: the Harlem Shake. The Harlem Shake challenge began on YouTube. Almost everywhere you looked on social media at that time were videos of an  individual dancing alone in a group and then when the song’s beat dropped, the video would cut to a ridiculous dance party, often with people in silly costumes or doing totally wacky moves. Fast forward a couple years and the Mannequin Challenge, a challenge to stay so perfectly still that you look like a mannequin, dominated Twitter feeds. *Cue the “unofficial anthem” of the challenge, Black Beatles by Rae Sremmurd*

Back in the early 2010s, these challenges had time to peak and breathe before the next viral challenge popped up. There were weeks and months consumed by these silly challenges, and if you were on the internet when these were big, odds are you saw them or even participated in a few!

TikTok has completely changed the game in this regard. In today’s culture, trends and challenges are shifting within just days. Viral challenges pop up constantly on FYPs across the country, often overlapping with each other. In May 2020 alone, we were introduced to the Album Cover Challenge, the Wipe It Down Challenge, the Flip the Switch Challenge, and more. Now in 2021, we’ve seen the #sheeshchallenge, the Please Don’t Go Challenge, and the “Tell Me Without Telling Me,” also known as #TheTellMeChallenge, just to name a few.

The challenges we have discussed previously have been all fun and games, but there are times these challenges are not. I’ll admit it, I tried the Cinnamon Challenge, the popular challenge on YouTube dating back to 2013, so that you don’t have to. Thankfully I was safe but many participants faced serious medical problems from inhaling a spoonful of raw cinnamon, some individuals even died from attempting this seemingly simple challenge.

This next challenge I am discussing I did not try, and I seriously do not encourage anyone else to try: the Tide Pod Challenge. Teens in 2018 were daring each other to bite into a laundry detergent pod and posting the videos online. Consuming laundry detergent can cause severe symptoms and even death, encouraging Tide to release a PSA with New England Patriots’ Rob Gronkowski addressing the dangers of this challenge and encouraging people to stop participating. This is a prime example of a dangerous challenge, and a challenge that is extremely damaging to the brand involved.

The newest challenge to add to the list of dangerous trends, having its peak worldwide this week, is the milk crate challenge. Here, participants are attempting to climb up and down a pyramid of stacked milk crates. Crowds have been gathering throughout this week to watch others attempt this challenge. While some who have attempted this challenge have been successful, many have left injured and even hospitalized. When the hashtag #MilkCrateChallenge reached over 71 million views, TikTok decided to ban videos featuring it citing its danger. So now you can no longer find other milk crate challenge videos on the app using a hashtag search. I personally will not be partaking in this challenge but if you choose to do so, I would encourage you to have a spotter and cushions below you.

Internet challenges are addicting to watch and participate in. It’s no surprise why brands would want to jump in, and even create their own viral challenges. The Adult Swim challenge is a great example of a challenge that was incredibly popular and positive for the brand it used. The challenge was not started by Adult Swim, but the brand was able to participate in its own way, showing they were in tune with their audience. We also see branded TikTok accounts consistently hopping onto the latest challenges that hit our FYP.

Branded hashtag challenges are extremely popular on the TikTok FYP, with the latest being the #JifRapChallenge where creators attempt to rap with a spoonful of Jif peanut butter in their mouth. This hashtag launched on August 16th of this year and already has 3.8B views as of the writing of this piece. The most successful branded hashtag challenge to date is Samsung’s #VideoSnapChallenge with over 30B views.

##ad Put Jif in your grill and duet me for real. ##JifRapChallenge @jif

With some paid spend, TikTok offers various Branded Hashtag Challenge options, that drastically increase a brand's discoverability across the platform. These challenges encourage consumers to unofficially become brand ambassadors by creating videos around your campaign. According to TikTok, a branded hashtag challenge is only successful when the challenge is authentic, culturally relevant, audio driven, fun, impactful, and simple. Seems easy enough right?

As I’m closing up this piece...‍

At least 20 other viral challenges throughout the years have popped into my head. The milk crate challenge might be having its moment for now but come next week, I would not be surprised if a new challenge is disrupting the internet. If you have been looking to create your own branded hashtag challenge, I know a team ready to create the challenge that will promote your brand and also connect you with the right influencers to kickstart your challenge.