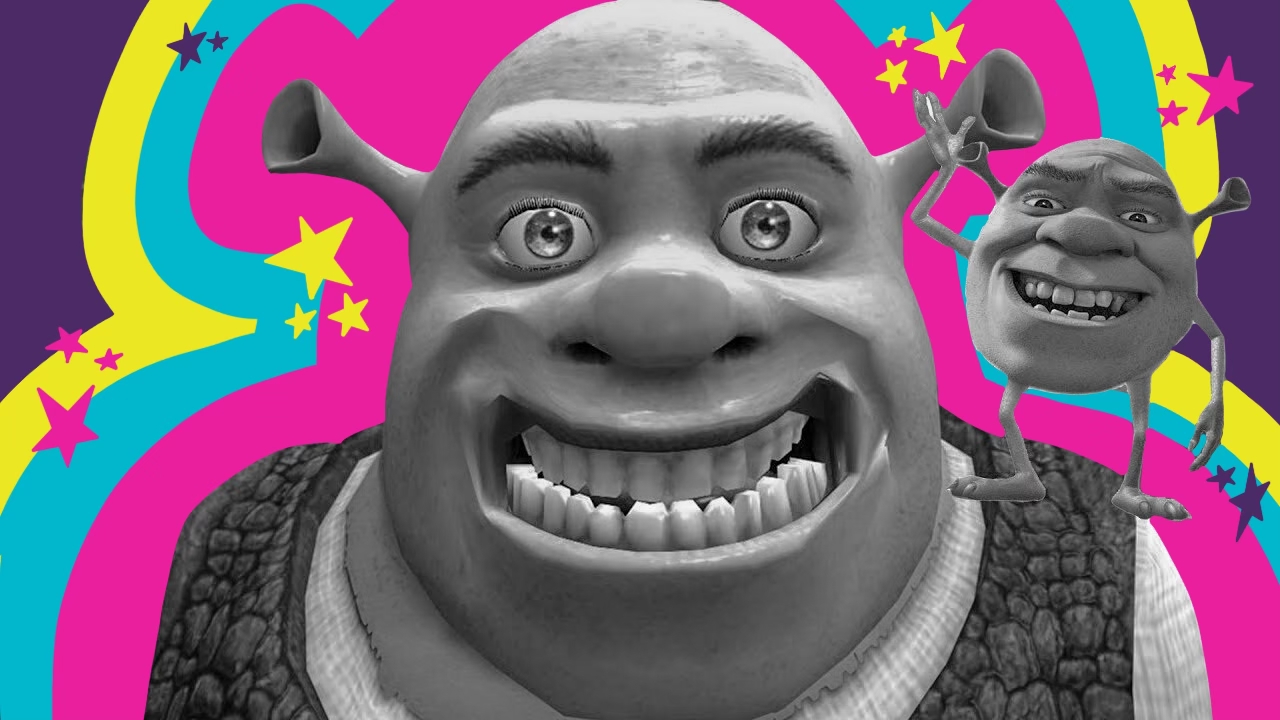 The Meme-ability of Shrek: Why Shrek Memes Will Never Die

‘Get out of me swamp!’ and into my memes.

very age demographic knows about Shrek. Whether you’re a Millennial, Zillennial, Gen Z or otherwise, chances are you’ve seen some portion of the classic Pixar movie where an animated green ogre is yelling at a talking donkey while trying to rescue a princess. For children, Shrek held wonder and mystery as a fairytale-gone-wrong, with flashy sequences, quick-wit humor and loveable characters. For teenagers and adults, Shrek holds something else: absurdity.

The first Shrek film (titled simply as Shrek) came out in 2001, and was met with overwhelming international acclaim–sparking an entire generation of Shrek films, merch and memorabilia. Although I’ve never personally met someone who hasn’t seen or heard of Shrek, here’s a brief recap of the premise:

Shrek is a big, green ogre (voiced by Mike Myers) that lives in a swamp outside of the castle town of Duloc. In a classic fairytale set-up, the ruler of Duloc needs a bride, but in a non-traditional set-up, Shrek gets involved through gentrification and threat of land seizure. Shrek meets a colorful cast of characters, rescues a princess, returns to the castle, and goes through a lot of plot twists and turns along the way. For sake of #NoSpoilers I won’t get into the nitty gritty, but that’s the gist.

As a parody of Disney films and other modern-day fairytales, Shrek contorts the audience's interpretation of what a classic fairytale film should look like. Shrek presents the main character and hero of the series as an anti-social, mean-spirited ogre that eats onions, yells at children and makes candles out of earwax. I won’t get into each individual instance of fairytale parody, but there are plenty–from Lord Farquaad compensating for being short to the Dragon being a girl that flirts with Donkey, Shrek throws out plot lines and Easter eggs so clever that the story resonates with everyone.

However, Shrek wasn’t just a movie franchise; it spawned an entire empire. There’s a Shrek musical, Shrek on ice, Shrek on Broadway...I even saw a Shrek cabaret routine on TikTok the other night. Partner that with the fact that you can’t go anywhere without hearing some memorable quote (“Donkeeeyyyyuhhh”), song (notably Smash Mouth’s ultimate banger “All Star”) or reference from some tiny part of the film series (my personal favorite is the Fairy Godmother across the grand piano).

But why is it still so popular?

It makes sense that I, someone who was of age when the first Shrek film came out and subsequently grew up with the films, would place importance on it, but why are people still talking about it today?

For lack of a better way to say it, Shrek was a film in the right place at the right time. The film franchise uses an impressive amount of nostalgia, but taps into multiple age groups while doing so. Shrek references all the classic Disney films that people would have also grown up with years prior–Tinkerbell, a Magic Mirror, Gepetto, Peter Pan and more. However, Shrek highlights the insanity of these characters, giving them flaws and personal traits not typically associated with those picture-perfect movies.

The Fairy Godmother is a maniacal masterpiece that sings karaoke. Prince Charming is an idiot that orders the kid’s Happy Meal. Pinocchio is an anxious boy and knows some form of hand-to-hand combat. Shrek and Donkey advocate for unionization.

Humor and nostalgia are important parts of what makes a meme, so it makes sense that Shrek would be meme-able based off of those two factors. However, there’s more to the story. For a film to be meme-able in its entirety for generations to come, it also needs to have absurdity. What if Prince Charming was dumb? How ironic would that be? The result is simple humor, but a humor that permeates through all age groups–and probably will continue to do so for generations to come.

There’s also visual humor in the presentation of the characters. Rumor has it that animators from the DreamWorks film The Prince of Egypt were demoted to work on a low-tier ranking project that would be Shrek. Whether they were disgruntled or inspired, the animators designed characters that were simultaneously ridiculous and realistic to the point where Shrek looked like it had cutting edge technology.

Now, however, those characters swim in the uncanny valley–making the film even funnier. Add the costume design on the characters, the fact that Lord Farquaad is a short man (and very self conscious about it) and other bits, and you get a meme masterpiece that strikes both audio and visual chords. Memes rely on many different forms of communication, so where there are audio memes in Shrek such as particular quotes, the hilarious visuals also give Shrek agency in the world of visual memes–allowing the franchise to jump into the world of social media.

Memes really just take off from there. Social media is a powerful tool to connect and communicate with others, and memes accelerate the process. Shrek’s perfect mixture of audio and visual humor and nostalgia make it an incredible medium for social media meme culture, and people have fun with it.

The characters are timeless, so when new trends come around it’s easy to mash them up with the existing humor associated with Shrek, resulting in fresh meme content. There’s even tons of articles explaining how “All Star,” the Smash Mouth track from Shrek, catapulted the band into superstardom practically overnight. The fame continued, and now years later Smash Mouth has played “All Star” so many times to so many audiences that even the band is getting exhausted by it.

Overall, Shrek is a piece of timeless cinema that affected our culture to the very core. The undeniable meme-ability of Shrek comes from a variety of factors, but most importantly from the audiences it reaches. Shrek has content for every age demographic, and parodies references from traditional children’s films actively knowing that most people have seen or heard some form of fairytale in their childhood. This nostalgia acts as a powerful agent in meme culture, and drives a lot of engagement with Shrek-related content.

Memes are powerful tools of communication and networking, and the importance of Shrek shows that. While memes would certainly exist with or without Shrek, the film would not have been so long-lasting had it not sparked such meme trends.

Memes give eternal life, and that’s why the legacy of Shrek will live forever.