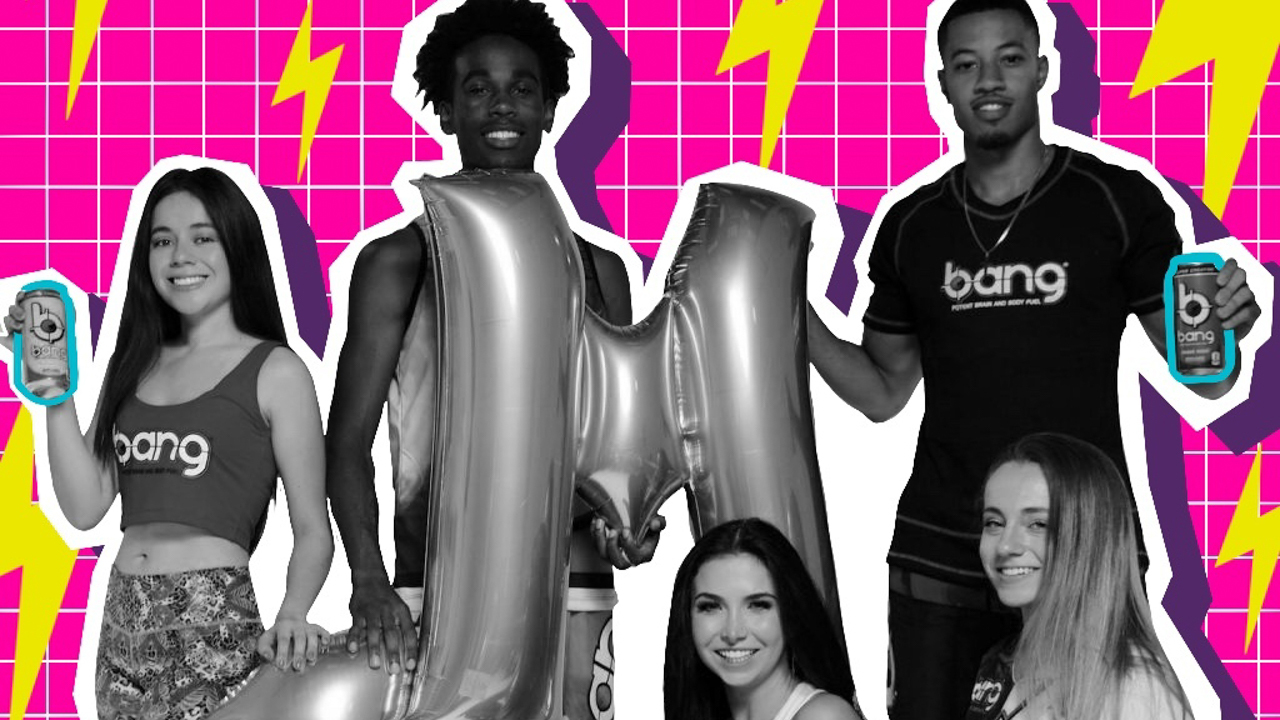 What Bang Energy Does Right (And Wrong) Advertising On TikTok

Bang Energy has a powerful presence on TikTok, with a hashtag boasting over 12 billion total views and videos with some of the most popular influencers. Here’s what we can learn from their TikTok strategy.

f you were to measure the beverage company Bang Energy’s success by social media presence alone, it would be easy to assume that it’s one of the most popular energy drinks in the U.S., and those assumptions wouldn’t be too far off.

According to an August 2019 report from Beverage Industry,  Bang Energy, which was marketed as a low sugar, healthier energy drink alternative, was the number five best-selling energy drink that quarter. By the end of 2020, Bang reached the number three spot in the U.S., just under Red Bull at number one and Monster Energy at number two according to Caffeine Informer.

Bang Energy has managed to grow significantly in its nine years on the market, and a big part of that is thanks to the company’s dedication to promoting their products across social media. Bang Energy has a massive TikTok presence in particular, giving them a strong connection to the young adult market on one of the fastest growing social media platforms.

What They Do Right

Bang Energy has one main goal on TikTok, and they achieve it in spades: visibility.

Bang works out contracts with some of the top rising TikTokers through their Bang Influencers program. Any influencer can  sign up for the Bang Influencers program on their website by filling out a form. Accepted creators work with Bang Energy to make viral promotional content for the drink, and they make sure viewers know they’re watching a Bang ad.

A typical Bang Energy ad on TikTok looks almost like any other trending video on the platform but with one key difference: the unmistakable presence of Bang Energy. A can (or cans) of Bang Energy – label showing – is present in almost all shots of the video. Sometimes the TikToker will even mention the brand by name, but not always; it’s not necessary due to Bang being everywhere you look. The hashtag #BangEnergy is always used, a tag that’s collected a whopping 12 billion collective views and is still rising.

Browsing through the hashtag you’ll see some of the top influencers have partnered with Bang – names like Tony Lopez, Alex Warren, Bryce Hall, and Sam Pepper -- creating content similar to what they’d usually create, just with Bang Energy in the frame.

The most popular videos under the hashtag have tens-of-millions of views and portray Bang Energy as a fun drink for young people; the videos are always bright and energetic, and extremely clickable.

I trapped smoke inside of a container... Do you think that the smoke will still be there tomorrow🤔? @bangenergy  @bangenergy.ceo #bangenergy #ad

They don’t try to force the narrative or flow of the ad by any means, letting each influencer create the content they know how to around the Bang Energy brand. The presence of the hashtag and the can in the video is enough for viewers to understand what’s happening and subliminally get them thinking about it, while also giving them worthwhile content to watch. Having big-names advertising your product is an obvious plus, and not forcing them to read tired ad-copy shows that Bang Energy understands what works on TikTok.

They go a step further by mostly showing their energy drink next to fit people doing active things, hyping up the drink’s place as a healthy alternative to its competitors.

The numbers speak for themselves on these videos, and clearly Bang Energy knows how to work with influencers well and has found great success. So, what could possibly be the problem?

What They Do Wrong

There’s no such thing as too much visibility when marketing a product in a traditional sense, but social media doesn’t work the same. While Bang has noticeably reaped the rewards by advertising on TikTok and social media in general, the company is also the frequent subject of jokes in the comments sections of their branded videos, making fun of how transparent the ad is.

It is important to note these comments likely have no effect on Bang’s market, and are overwhelmed by positive comments about the content of the video itself (again highlighting Bang Energy’s success in letting TikTokers do their thing) a smaller company might not fare so well with the blatant call-outs for their product placements.

Bang Energy has been on the market since 2012, and had a large presence before they began heavily advertising with influencers on TikTok and Instagram. They have the resources to properly pay influencers for their time, and to mass advertise on a platform without seeming too forceful.

But, If you replaced a Bang can with a Monster can, I would bet that nobody watching the video would bat an eye.

Bang has worked out a key formula here mixing influencer talents with product placement, and ignoring any step in the formula could easily come off by a smaller brand as pushy. Think of it like seeing the same advertisement come on the TV every commercial break. It grows old fast and might even discourage you from shopping with the brand.

Bang Energy runs the risk of this over-saturation, and likely achieves it for a percentage of viewers, but they have the clout to get past it and reap the benefits over the risks. A smaller company, or one that tries to advertise too inorganically in this same manner, might not find the same results.

If you have a product to advertise, getting an in-route with the TikTok crowd is almost always a good idea, but it must be done organically. Unless you have a large presence and backing already, pulling a massive operation like Bang Energy on TikTok is near impossible.

Finding rising TikTokers to promote your brand is a good idea, but either start slow and increase from there, or work with a partner that has the right connections and experience to guide your brand. Take the time to build your presence on TikTok in general, and don’t frame your content as an ad first, but as a source of entertainment. The more re-watchable, the better. There’s no such thing as too much visibility, but there is such a thing as too much forced visibility, and finding that balance is key to advertising the Bang Energy way.

Phillip Hamilton is a professional writer from Ontario, Canada, who specializes in topics surrounding memes and internet culture. He is currently working as an editor at Know Your Meme, and as the Director of Writing at Meme Insider Magazine, where he dissects and investigates various aspects of meme culture with some of the biggest names in the game.

Concepts Discussed
TikTok
Brands
Ecommerce
Thank you! Your submission has been received!
Oops! Something went wrong while submitting the form.