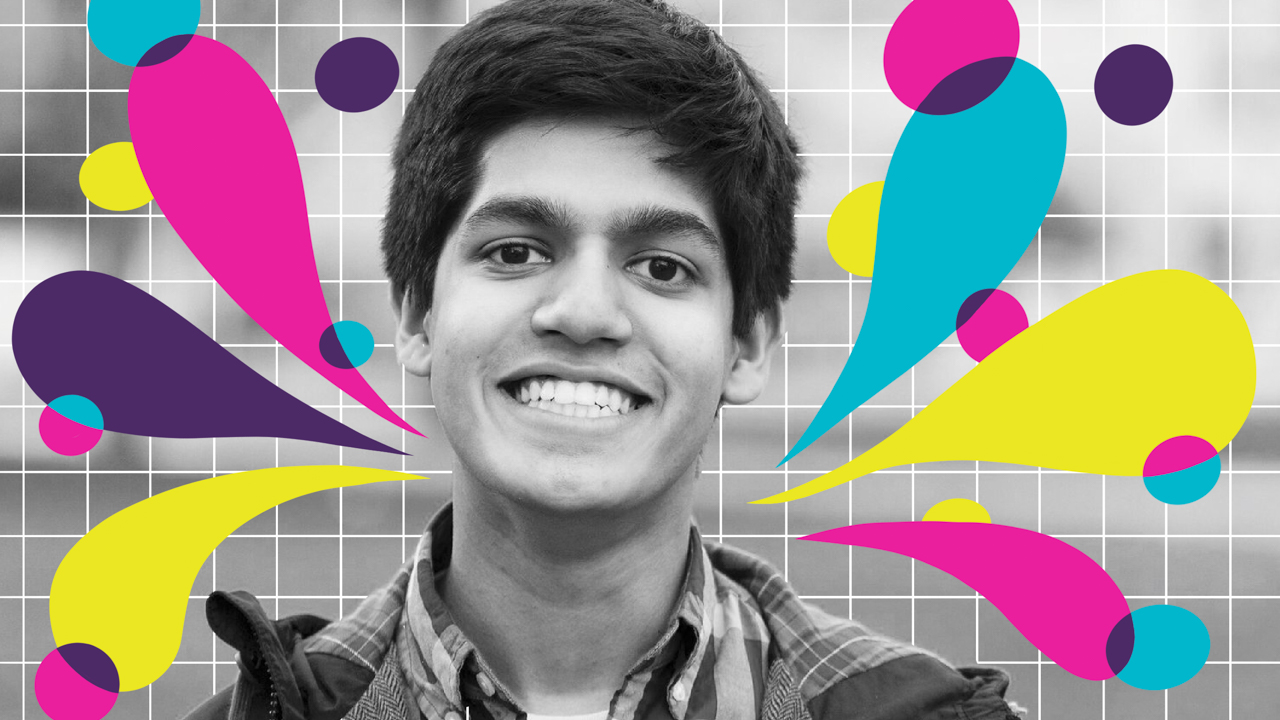 Ziad Ahmed, Founder of JUV Consulting, on the Link Between Social Good and Meme Culture

“I'm grateful that so many creatives of color continue to push culture forward and push the envelope. They create, inspire change, and educate. I'm excited to see that happen more often, because I think the world looks better when it does.”

hat does social justice mean to a world that is growing increasingly more digitized? That’s exactly what Ziad Ahmed, the founder of non-profit organization Redefy and Gen-Z consulting group JUV set out to answer.

On the surface, Ziad Ahmed is a 22-year-old living in New York City. However, Ziad Ahmed is also a CEO, entrepreneur, speaker, and leader that inspires change through social media, Gen Z culture and strategy, and memes. After all, marketing is about communication––and no one understands that better than Ahmed.

I sat down with Ziad Ahmed to discuss his work at the intersection of media and social justice, and how we as an industry can learn from others to make positive change for the future.

[Bailey] You’ve written on websites and on your LinkedIn that you're passionate about purpose, politics, technology and social justice. Can you explain exactly what those core ideas mean to you?

I also think that politics and purpose are who I am. I think who all of us are. I'm an American Muslim progressive. Growing up it was always really clear to me that people are oftentimes deemed as “others” because of who society thinks they are, and that didn’t sit right with me.

I started a nonprofit when I was in eighth grade centered around creating resources and information for communities and schools, by making them more equitable and inclusive. Through that and through finding myself in a lot of rooms at a really young age, I realized how often people were being silenced or talked over, and how that was not just true in the realm of social justice, but also in the realms of politics, marketing, technology, and more.

How do you and your businesses embody those ideals?

It was really clear that in some of those conversations I was having with high profile individuals, there were so many questions about young people––but no one was actually talking to young people. That’s what really inspired me to start JUV Consulting. We’re a company that exists to empower young people and to provide our clients with solutions to help them empower young people. We sit at the intersection of trying to understand how we show up to work, with our politics or our identity. How we embed or present ourselves into the campaigns that we're running for our clients, and how we show up with meaningful and compelling storytelling across digital formats.

I think about how technology is shifting the landscape, how I can embed purpose into what I do and how hopefully we can move towards systemic change through policy, through business and beyond, such that more of us are uplifted in power.

Absolutely, I love that. You mentioned right at the end, that you’re viewing purpose and power through a changing technology landscape. What do you believe is changing?

I'm going to be honest with you––I think very little is changing for the better.

More recently we have seen a lot of bad actors subvert social media for monetary or political gain. We’re living in times characterized by misinformation, division, hate speech and bigotry, and I'm not super optimistic about the future of our digital landscape.

That being said, I have not seen significant movement on behalf of our platforms to crack down on misinformation or really troubling ideologies running rampant across social media that actively pose risk to so many communities.

WHOS READY FOR THIS ICONIC DUO COLLAB @veondre !!! The best is to come &lt3

While those are present issues, there's a lot of stuff that I still enjoy and love on the internet! We’ve seen the advent of TikTok, which has helped empower a lot of young people to the forefront of talking about issues that matter, or creating content that changes culture––and I think that’s exciting! There's a lot of humor coming out of TikTok that warms my heart, and humor across the internet makes a lot of us feel more interconnected. Many of us follow the same trends and follow the same influencers, so hopefully we're approaching a space where we can have more empathy with one another.

With the advent of the internet and with the advent of social media, there’s been a lot of good that has come in so far. There are more voices being heard, so far as democratizing access to microphone and to megaphone. I believe that these social media tools have tremendous utility to get us closer to where we need to be, but I also believe that we need more of us working on the same side to get there.

There you go, awesome! Let’s dial down into JUV’s expertise with Gen Z. What's one thing that sets Gen Z apart from its predecessor?

Millennials grew up in a world where things were new, and that changed a lot about how they looked at the world and their psyche. Millennials fought a lot of really important battles for us.

#duet with @curtisroach when i made this i didn’t think it would change my life. I only had 12 bucks to my name... tysm #boredinthehouse #curtisroach

I don't think about it to share life updates, I think about it as another vehicle to communicate. I can be whoever I want to be, but I don't have to be alone in that. I can find someone thousands of miles away and we can be that together. That sense of “we-ness’ is really what I think sets Gen Z apart more than anything else.

What do you think is the most defining characteristic of Gen Z?

This idea of who we are is bigger and constantly expanding because we're living in an increasingly globalized and democratized landscape where more of us are being connected simultaneously. Since I was a kid, I've been instantly connected to every single person I've ever met with the click of a button. That makes us feel much more connected to realities that are not our own. If it doesn't affect us, it affects them whether someone that we love or someone that we know or someone we follow.

We're not all the same, we’re beautiful because of our many colors. If the table wasn't built for us (or people who look like us or people that we love) we don't want it. We’re going to flip the table or build a new one. I think that precisely what we're doing as a generation is we’re claiming “us as us” and we're actively seeking to disrupt infrastructure that wasn't built to serve “us” and trying to build a new infrastructure that hopefully empowers more of us forward.

What do you think about brands using meme marketing as a tactic?

The word “meme” is a lot bigger than just a text post with a picture attached. I would argue that any advertising on TikTok is meme marketing, right? I would say TikTok in its essence is a meme platform. I would say that meme culture is the undercurrent behind a lot of Gen Z culture, if not most of Gen Z culture.

The very basic premise that we all want to prove that we're in on a joke, right? Or that there's some format that we are “meme-ing” to take our own spin on. That way you get to prove that we are inside the joke, by understanding how to format it correctly. Then we are considered hilarious if we do something slightly differently to a format everybody else is already familiar with, and that is comedy, that is what meme culture is!

Meme culture is why I think TikTok has been so wildly successful in a lot of ways, because it is a platform where that is the whole concept. Right? You use one TikTok track, one audio, one format, and everyone gets to do their take on it. That’s “meme-ing” in its essence.

What are some brands that have used meme marketing that you thought were really successful?

When I think of who is doing meme marketing well, it's not so different from who I think is doing marketing. Who is tapping into the trends of the moment and who was doing so in a way that is culturally resonant, innovative, and interesting? There are certainly obvious answers like Chipotle, who have been so effective in engaging with current moments in current trends and moving quickly.

This was years ago, but the Gushers meme ad was some of the best in class, and really looked organic to what Gen Z was actually pumping out at the time. It really, for me, is the blueprint of successful meme marketing.

“Dude With A Sign” is a meme format, and that's been tremendously successful. People can be memes. One can certainly argue Trisha Paytas is a walking meme.

Meme marketing permeates “most” good advertising because I think good advertising and good marketing acknowledges an existing format or cultural trend or insight and does an interesting and unique take on it. Otherwise, you're doing something that's already obvious, or you're missing the mark altogether because you're not engaging with something that's already culturally within the context.

Overall, meme culture will continue to evolve, adapt, shift, and hopefully––be inspired. It’s hard to be funny, purpose-driven and digitally savvy, to have all your sh*t together, and to have a good product. That’s why people like me have a job!

Yeah, absolutely. Meme marketing is all marketing! Speaking of which, what are some of your current favorite meme formats?

I don't know that there's one trend that I'm most obsessed with, but when I zoom out, a broader trend that I’m loving is seeing young people using TikTok and social media to educate others about their living experience and the things that matter to them. Seeing a generation that is more conscious, more active and participant because of that is really encouraging and inspiring.

I think Kahlil Greene is an excellent example of a creator doing this. He’s a friend of mine who is using TikTok to educate others about how so much of meme culture and what we consider to be “Gen Z” culture is actually rooted in black culture and black creation.

We ought to acknowledge that.

You’re right. Keeping that in mind, what's a trend that really makes you laugh right now?

I would be foolish to answer this question without acknowledging that so many of the trends we're seeing right now that are “hot” belong to the Black community.

We must be much more responsible and cognizant of that. We need to give credit where credit is due, because we certainly need to do a lot better when it comes to giving credit––especially when it comes to the Black community.

I'm grateful that so many creatives of color continue to push culture forward and push the envelope. They create, inspire change, and educate. I'm excited to see that happen more often, because I think the world looks better when it does.

Perfect. I really appreciate your time today! Thank you for your insights here.

You’re welcome! It was great talking with you. Thanks!

Bailey was one of the first movers in the meme marketing space creating unmatched digital experiences and building fan favorite brands across social platforms.